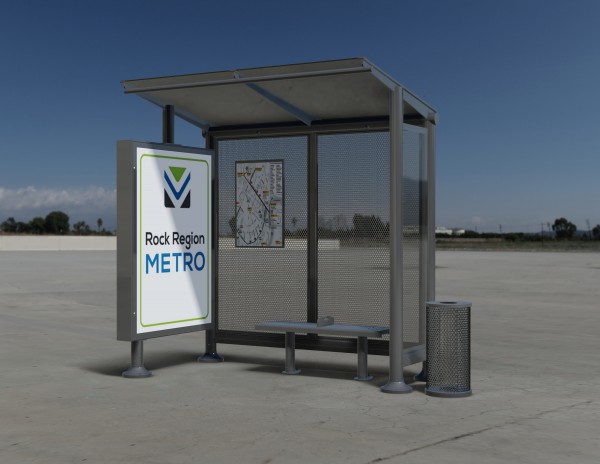 This rendering of a new Rock Region METRO shelter is similar to the design of the coming solar-powered shelters coming in 2016.

Rock Region METRO has been awarded a $360,000 Transportation Alternatives Program (TAP) grant to purchase and install 25 new solar-powered shelters. Each shelter will have solar-powered lighting, a bench and a small bike rack. The total project cost is $450,000, with Rock Region METRO providing $90,000, or 20 percent, of the cost with local funds. This is the agency’s first TAP grant award.

The TAP is a federal aid program established in 2013 that provides funding for construction of on- and off-road pedestrian and bicycling facilities, including lighting, and other projects defined as transportation alternatives. The Arkansas Highway and Transportation Department administers the program within the state.

“This is such exciting news for our riders,” said Jarod Varner, Rock Region METRO executive director. “One of the top goals of our board of directors is to improve passenger amenities. The TAP grant will provide us with 25 new passenger shelters in addition to 30 other shelters scheduled to arrive early next year. Both of these orders mean we are able to increase our agency-owned shelters by 55 percent within a few months and provide a more comfortable and safe experience for our riders.”

The 25 shelters will be ordered and installed in 2016 and placed in locations of high importance based on ridership.

“We are proud to bring enhanced public transit amenities to the communities we serve as we pursue more investment in this essential service,” said Allie Freeman, chairman of the Rock Region METRO Board of Directors.

Rock Region METRO is the public transit system serving 3 million passengers per year in the cities of Little Rock, North Little Rock, Maumelle, Jacksonville and Sherwood and Pulaski County. It comprises the METRO Local fixed-route bus system, including 22 fixed routes and four express routes and covering 51,000 miles weekly; the METRO Links custom-route paratransit van system, covering 12,500 miles weekly; and the METRO Streetcar, a 3.4-mile streetcar system covering 1,080 miles weekly. Created in 1986 with an interlocal agreement among the partner jurisdictions, Rock Region METRO is governed by a 12-member board of directors who are appointed by its service cities and county. rrmetro.org
# # #