“Public transportation gets you out of your bubble.” 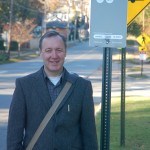 We love this story on John A. Kirk, professor and chairman of the University of Arkansas at Little Rock Department of History and one of our Rock Region METRO riders:

Using public transit comes naturally, and by choice, for John A. Kirk, 45, a professor and chairman of the UALR Department of History.

Kirk is from Manchester, England, about four hours outside of London. “My parents never owned a car so I grew up on public transportation,” Kirk says. “I never learned to drive until I came to Little Rock.” That was in 1992, when Kirk was here to research what is now his specialty – the history of the civil rights movement.

He went back to England for teaching stints at the University of Wales and the University of London before returning to Little Rock in 2010. He commutes from his home in the Heights to UALR almost every day, leaving the family car to his wife as she takes care of their young son.

“I love riding the bus,” he says. “A stop is just around the corner from my house, and I don’t have to worry about parking. It’s much less the weather and more aware of what’s going on around you.”

When he needs to get into downtown from campus, Kirk takes the No. 16 bus, which runs along Asher Avenue and Roosevelt Road.

He supports Rock Region METRO’s effort to expand, including the proposed ¼ cent sales-tax increase that would be dedicated to the transit system. “It would be nice to have more routes and later hours,” he says, noting that the last bus from downtown into his neighborhood is at 6:20 p.m., and there is no Sunday service at all. He also praises the system’s new environmentally friendly gas-powered buses and free WiFi connections.